Oleh Pelakon Takdir
One of the many tourists attractions in Indonesia is Komodo. This animal belongs to the lizard family. If you want to know how a Komodo looks like just figure out a very huge lizardwith the length of more than three metres and the weight of about 136 kilograms. People also call it Komodo dragon because Komodo also looks like a dragon.

Its skin is bright and scaled. When sunlight falls upon its body the grey scales on the body exposes a horrible appearance. Its long neck raises its broad head when it sweeps. The legs, too, are strong enough to lift its body. The teeth are serrated like a saw and used to tear its prey after the sharp nails of the claws have captured it.

Watching Komodo dragon savouring its victim is really a shuddering scene. But tourists do enjoy being shuddered at Porreng valley and Walo Liang at Komodo island. For the scene they pay and then look down at the meal party of Komodoes. A dead goat tied up and hung to a low branch. The hungry Komodo tries to reach and tear the bait.

The other islands of Komodo are Rinca and Flores. In these parts of the islands people are frightened when the komodoes raid their domestic animals. They are really scared if the beasts might also attack their kids. 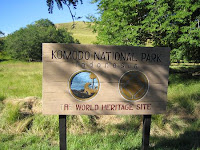